BlogTO just wrote a piece about New Moon (and me) as a featured look behind the scenes at our cookie factory. I must say, getting this jolt of PR while cradling a 5 week-old baby felt pretty awesome, and I am so grateful that they came for a visit.
The article got me thinking though, about how we are creating, within our zillion media outlets, this superwoman power-mama who can do it all and it is oh-so-easy. 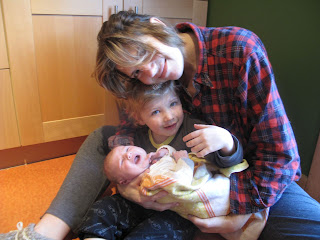 Since having Frankie (baby number two! A girl!) I've noticed a few women comment that I make it look easy, and while it's nice to hear a compliment, I also want to grab that woman's hand and say, "Lady, this is the hardest thing I have ever done."
I often compare myself to that mythical woman; the one who seems to pull it off without breaking a sweat. Although many, many women pull off incredible feats of multi-tasking and having the all, it doesn't mean we should feel we have to, or that the new norm means wearing as many hats as possible in order to feel whole.
In an attempt to debunk a myth, I'd like to share My Having It All with you.
Here is what I have:
- I have an incredibly short attention span and often look like an iguana tracking flies. I attribute this to the complete splicing of my life right now, and the compulsion to get everything done and maintain some small sense of having-it-together. In order to accomplish this I am always doing at least two tasks at once. Like: peeing and texting or eating and folding laundry.
- I have two kids. One of them is a rambunctious, spirited two-and-a-half year-old who is my favourite person in the world and also someone who likes to tear, throw, or break all my shit and is also prone to hitting other children which really helps my social standing.
My other kid is only six weeks old, but judging by her nighttime screaming I think she may be spirited as well. In other words, my ego lies crumpled on the floor.
- I have a cookie business that I am supposed to be running, but these days it feels more like a staggered jog.
- I have a home in Roncesvalles Village. It is awesome and also very messy. There is a kids' bike in the hallway and a utility closet I yell at whenever I have to go in there to get a roll of toilet paper and things like votive candle holders from our wedding four years ago fall out and smash at my feet.
- I have a couple postpartum issues right now, one which I am going to spare you the details of and the other a condition called vasospasm whereby I get pins and needles in my nipples. It hurts. As my friend who also had it said, "it's worse than my craziest night of sex ever."
- I also have a crazy temper these days, which I blame on the hormones, but let's just say that I have been punching pillows a lot and last week my husband caught me about to throw a book against the wall. The book was Guerrilla Marketing; perhaps I should read it instead of throw it.

I used this analogy after having that Cedar that my time felt more like snacks than a meal. Now with two kids it's like eating snacks really, really fast. So fast that you don't chew them and end up choking on a piece of carrot or something.
It's kind of maddening in the moment, but in the greater perspective it is beautiful to be at the mercy of life these days: to be a tangled mess, to wear the same pants for four weeks straight, to eat a dirty apple off the ground because I am hungry and could care less, to make a playdough couch first thing in the morning with my son before even having a bite of food or taking a pee. To be such a rundown, emotional version of myself: more raw and real than I have ever felt.

I guess what I am trying to say is that having-it-all (career and family) is not exactly pretty. At least not for me. There is so much push-pull around wanting to be at home but needing to work, and also wanting to work and get space from my kids. I feel like I am doing a crappy half-assed version of everything right now, and that's only because my expectations are set way, way too high.
It's a paradox, and yet I am trying to satisfy all the parts of me that need food - even if they are just snacks for now.

Email ThisBlogThis!Share to TwitterShare to FacebookShare to Pinterest
Labels: having it all 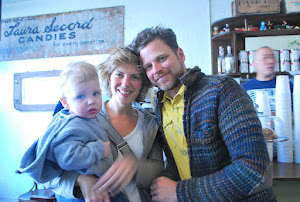